Can robots and AI replace Chefs?

With the fast-paced advances in technology nowadays, almost everything can be digitized. In fact, automation has been widely applied in every aspect of life, especially in areas that are directly related to humans’ basic needs such as drinking, eating, bathing, etc. We’ve already so acquainted with the presence of vending machines on the street, robot vacuums at home and so on. With regards to eating, AI and robots are also “invading” the kitchen, as we can see in the examples of food ordering apps such as Now or Baemin in Vietnam. While these were deemed unimaginable 10 years ago, they’ve become a reality nowadays.

In this article, we are going to discuss the current situation of robotics and automation in the food and beverage industry. More importantly, Hufr tries to answer the question of whether robots and AI will ever substitute the roles of chefs in the kitchen. 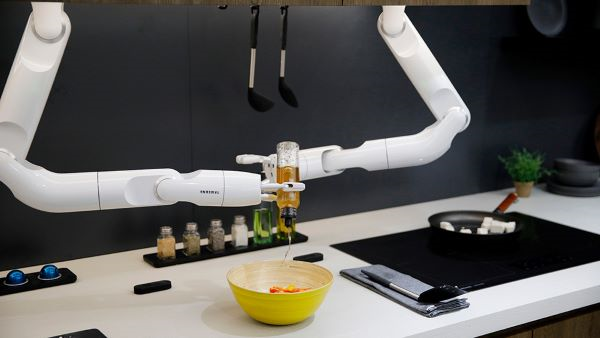 Widespread application of Robotics in kitchens

Up to the present, we can see the omnipresence of robots in many restaurants and eating establishments around the world. For example, earlier in 2009, at a restaurant named Nagoya in Japan, robots were used in place of chefs in the kitchen. Nowadays, in Japanese restaurants, sushi-making machines are no longer a sci-fi scenario. In fact, Suzumo Machinery Co., Ltd. - a powerhouse in food-processing automation - has distributed sushi-making robots to 80 countries in the world. Similarly, in 2018, a Boston restaurant named Spyce managed to use autonomous cooking robots to prepare meals for their customers.

Robotic cooks aside, the application of automation in kitchens are more deep-rooted than you can even imagine. Since 2014, we have witnessed the development of Moley Robotic Kitchen - the first robotic kitchen in the world. Five years later, Moley Robotic Kitchen was on sale in the year 2020. It’s not exaggerating to say that in just a few years, automation will transform the way we eat food comprehensively.

"Robotics have not really been at home before, so we are making the Moley kitchen available for the mass market. We want to make a difference to peoples’ lives – collectively, we have to do better”, said Mark Oleynik, CEO of Moley Robotics.

Future of Robotics in the food and beverage Industry

Around the globe, developed countries are investing in automation in food and beverage. Food industry is such a big pie, and to gain as much profit as possible, firms always try to slash labour expenses with the introduction of technology. From the perspectives of customers, mass-produced food means that they’ll have the chance to taste different food at a much more affordable price. Thus, the inclination towards automation in the F & B industry is just unstoppable.

Another perk of automation in the food and beverage industry is personnel safety and food safety. Regarding the former, many kitchen tasks that are dangerous or physically-demanding can be replaced by machines. For example, workers no longer have to carry heavy baskets of materials or chop piles of onions in the kitchen. In terms of food safety, the help of AI and robots will minimize human contact on food, which may result in food contamination or disease spread.

This is especially true in the case of Covid-19 as we are facing right now:

We all know that the coronavirus has hit the food and beverage industry hard since 2020. While we don’t know when the pandemic will end, what we can do is to find ways to provide safe food for the customers, which eventually helps stop the Covid. AI and robotics will make sure that food supply is contaminant-free and sanitized.

"In many cases, these are situations where workers work very close to each other on a production line… the robot (…) is likely not going away even after the pandemic is over”, said Rick Graff and Greg Powers, Gray solutions, USA.

Will chefs be replaced by robotics and AI?

The use of robotics and AI in kitchens have been part of our everyday life and will be further applied in the future. Lots of kitchen-related jobs will have been replaced such as waiters, short-haul drivers, or clerks, etc. Also, robotic chefs can cook palatable dishes, so it’s likely that cooks will be relieved of several tasks.

However, it is unlikely that robots will completely replace cooks, at least, in the next few decades. The reason is that robotics and AI have yet to be fully developed, and the implementation of these are still costly. Also, the essence of cooking lies in a cook’s limitless creativity, whereas robots are pre-programmed by humans. For the time being, they remain unable to create novel recipes or dishes without the intervention of humans. Also, the nature of the kitchen is problematic. Many unpredictable problems can happen anytime, and this is where robots cannot outdo humans. There are still a lot of rooms for talented chefs with creativity, flexibility, and problem-solving skills.

Ashish Kumar Sanyal - Executive Chef at The LaLiT Bangalore, India confirmed this: “Robots may take the restaurant space to drive convenience. But the basics are bound to come back and there is no way that the job of a chef is in danger.”

“Robots will be part of our cooking, but the chef’s indulgence has to be there. The final cooking and food can be tasted only by humans. Yes, they will help us, support us, but the role of chefs will still be alive,” said Robin Batra, Executive Chef, Oberoi Hotels & Resorts, India.

In this era of technology, robots and AI have been universally applied. There have been cooking tasks that are substituted by automation. However, the creativity and passion of chefs can hardly be obsolete.

Are you working in hospitality ? We are hiring for all positions
Register now

Are you looking for a new position?